“ ’Tis a bleak morn to be enterin’ this witchin’ town,” a grizzled sailor mumbled as he assisted a young woman into the unsteady longboat.

Cold, sticky air ripe with rolling fog enveloped the seas abeam Salem, a place haunted by its persecution of witches nearly one hundred years ago. Though infamous in history, the thriving seaport now drew the educated and adventurous. Alexandra Gables, debarking the schooner Defiant, was no exception.

“Surely you do not believe in such endowed humans as witches,” Alexandra countered, mildly amused that people still maintained such unenlightened beliefs. “Even Salem has professed shame for the hangings. I do recollect they offered legal apologies and restitution to families of the victims.”

The sailor’s sun-hardened face, days distant from the blade of a good razor, crinkled in doubt. “Me mariner ears hear many a tale, ma’am. But no doubtin’ by me, every tale entwines a true fact. There be witches in Salem.”

She nodded politely and glanced up at the Defiant, searching for signs of her tiny companion. Crimson spears of sunrise cast a reddish glow on the fog-draped schooner. A truly enchanting morning, if she allowed such a persuasion. But enchanted was not the word she chose.

The ocean rolled gently beneath her feet inducing flutters in an already tentative stomach. She stepped toward the stern of the longboat thankful that the trip to shore was a brief one. She settled near the coxswain and tucked the fullness of her cotton skirt and petticoat discreetly onto her lap. Above, a covered birdcage attached to a rope descended slowly from the schooner deck. An oarsman handed over the cage and placed it beside her on the seat plank.

“Wha’ creature ye ha’ in there, Mistress Gables?” the Scottish born sailor asked, puzzled by the cage. “It no’ moves like a bird.”

“You are most clever, sir. ’Tis not a bird, but a creature I call Newton. He resembles the fabled companion Black Sam used to keep.”

The man’s eyes widened at the pirate’s name as he took a seat facing her and set his oar. She easily noted his desire to hear more. “I see you are familiar with Black Sam’s exploits.”
The deep-voiced coxswain behind her bellowed, “Aye, Mistress. Any sailor worth ‘is salt has heard of ‘im and ‘is stormy demise.”

He switched his attention to squeezing in the last of the passengers and casting off from the schooner. Not until the oars dipped cleanly into Salem Harbor and he had steered clear of the ship, did he lean toward Alexandra again. “I ne’er heard sailors speak of any animal on ‘is ship.”

“Not just any animal, but a small, rugged, resourceful creature,” she replied. “Tales say ’tis why Black Sam kept him. He discovered the creature when filling water casks at anchorage in Hispaniola. Some claim the two locked stares not sure who appeared more fearsome.”

The coxswain and oarsman stared with curiosity at the covered cage. As though in response, Newton shifted in his cage, banging his tail against the thin metal. The men jumped, and Alexandra fought to hide her amusement. With dramatic hesitation, she lifted ever so slightly the edge of Newton’s cover.

Orange-brown eyes set in a rough jumble of green scales glared out at the men. Like a true thespian, Newton inflated his scaled beard to display a row of short spikes. The men gasped and she lowered the cover.

“That be a devil’s creature,” the oarsman puffed and glanced suspiciously at her fiery hair she had properly tucked beneath a hat.

“ ’Tis simply a reptile,” she countered. “A French philosopher traveling from Cap-Haïtien gave this specimen to my father.”

A sudden shift in temperature brought the discussion to a halt. A quiet foreboding made its presence known in the foggy shroud. Every rhythmic slap of the oars into the harbor brought the longboat closer to shore and deepened her building unease. She knew of no possible reason for these dark feelings. Past scientific forays with her father into the western woods of New York and the wilds of Nova Scotia had offered far more danger than this trip to Salem.

Strange, but some internal voice foretold that the danger didn’t arise from bears, snakes, or Indians; it emanated from someplace far less obvious, from the very essence of Salem––or even from her own soul.

If you enjoyed reading this excerpt, you can buy the book at Amazon, Barnes & Noble, iBooks, and Kobo. 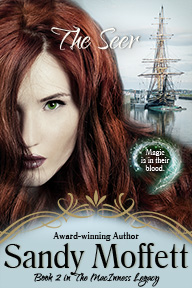 Past winner of The Lories Award Best New Paranormal Author